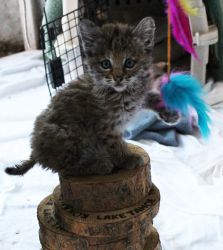 Good news for Chips, the baby bobcat rescued by firefighters on the Chips Fire in Plumas County. The little critter got a thumbs up from the vet for having regained her eyesight and a new cat tree, courtesy of YubaNet reader Paul Petrali. 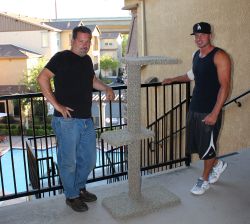 Chips was found by Tad Hair, the Mad River Hand Crew Superintendent, on August 25th. Chips Fire Information Officer Laurie L. Pearson wrote the initial news release, making the abandoned and singed kitten an instant national story. She had second degree burns on all of her paws and her eyesight was in jeopardy.

She was transferred to Lake Tahoe Wildlife Care in South Lake Tahoe, a volunteer organization specializing in raising, rehabilitating and releasing orphaned and injured wild birds and animals. The non-profit is operated under permits authorized by the U.S. Department of Interior and Wildlife Services, as well as California Fish and Game.

A week after she was transferred to LTWC, the organization created a special “Chips Page” on their website.  Cheryl Millham, the Executive Director of Lake Tahoe Wildlife Care (LTWC) says  that her paws were doing much better, thanks to the care she receives. Being a kitten, she needs stimulation and entertainment. LTWC would love to get her a climbing tree and some sturdy toys, Millham told YubaNet.

Our call to “Chip in for Chips” resonated with readers far and wide.
We received a call from Paul Petrali in Rocklin. Petrali said he wanted to donate a custom cat tree for Chips, built by his son Tony, which was delivered to LTWC.

In the meantime, Chips was checked out by a veterinarian specializing in ophthalmology for animals. More good news, Chips’ eyesight is fine. Her eyes were barely open when she was found and smoke and heat did a number on them. Lots of flushing and care paid off, her eyesight was pronounced completely restored.

Now, Chips is improving on her diet of mouse fricassee and her energy and curiosity are rapidly increasing. She will make sporadic appearances on one of the webcams installed at LTWC. Check in the afternoon between 1 and 3 pm, chances are you will see the little fuzzball and her brand-new climbing tree.

LTWC is accepting donations for Chips, either securely online or by phone or mail. Lake Tahoe Wildlife Care, Inc. (LTWC) is a 501(c)(3) tax exempt organization. Their Federal ID number is 94-2799765.