The new CHP Office on McCourtney Road just across from the Fairgrounds was opened up for a media tour today,  led by the Commander of the Grass Valley office. 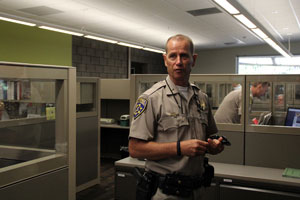 Lt. Jeff Arnswald says compared to the old CHP building on Sutton Way  which was less than 2,000 square feet, the new facility has 15,600 square feet with 45,000 square feet of parking area on 4.7 acres. The building is visually appealing , while strong enough to withstand an 8.0 or greater earthquake. The entire building meets Federal ADA requirements and the 2 evidence rooms  and the armory  are protected with a sophisticated key card plus  password  security system.  Lt. Arnswald says the building  has achieved a  LEED SILVER  ranking  which stands for  Leadership in Engergy and Efficiency Design,   and environmental protections are included  throughout the structure right down to the car wash …

A mechanics shop was build to maintain the 15 vehicles assigned to Grass Valley. Lt. Arnswald says they even stock their own tires and brakes because they wear out so quickly.
He says  tires on a patrol car only  last 20 to 30 thousand miles, and if a tire is punctured they replace rather than repair it. 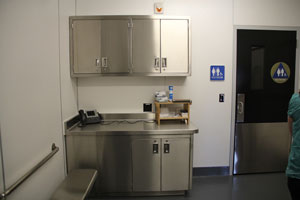 If an officer needs to question a subject or draw samples for sobriety tests, there is a special room with an outside access door  to secure the subject while that’s being done. 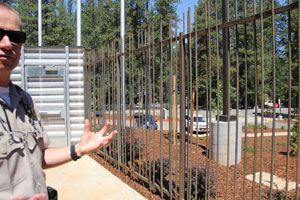 The wrought iron fencing around the building is in keeping with  Nevada County’s mining history and will rust with time. The spines of the fence are spaced out to represent the letters C-H-P in Morse Code.

A more modern looking 120 foot communications tower stands to one side of the grounds. 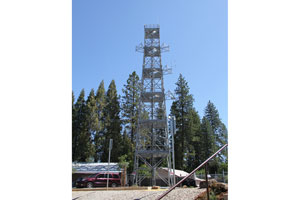 The CHP does not own the new building. Third and F Street Developer out of Sacramento  built it to state standards, and used local contractors when possible.    State Motor Vehicle Account funds will pay the  lease with a  10 year cost of $13.2 Million  with a purchase option at a later date.  The lease payment covers the building, furnishings and landscaping.  The CHP will pay for electricity and natural gas. 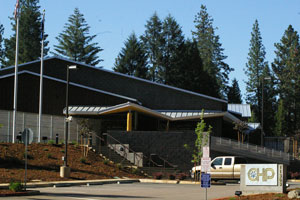