The Nevada City Chamber of Commerce presents the prestigious Kilroy award, established in 1969, annually to a citizen whose efforts help make Nevada City a better community. Chamber Executive Director, Cathy Whittlesey says  the Chamber’s Board of Directors selected  Chamber Administrative Assistant, Cindy Moon to receive the award to honor her dedication and support of Nevada City.
click here to listen to Cathy Whittlesey 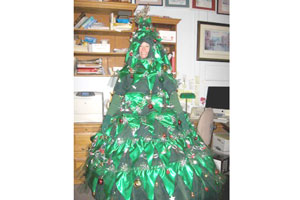 Moon is a lifelong resident of Nevada County and   helps with   Summer Nights, Victorian Christmas, Mardi Gras and 4th of July. Whittlesey says  “The Board felt that she really has Nevada City in her heart and the Chamber appreciates everything she does to keep Nevada City a vibrant community”    The Kilroy Award is one of the several annual awards presented by the Nevada City Chamber of Commerce.

Other 2013 recipients are: The Nevada City Farmers Market is being Honored with the Dr. Leland and Sally Lewis Visual Arts Award.   Jed Dixon Is the recipient of the 2013 Dr. Leland and Sally Lewis Performing Arts Award.   The Crazy Horse Saloon was recognized with the Annual Stan Halls Architectural Award.  Saul Rayo/Elana Powell are the recipients of the Chamber’s 2013 Live Music Award. The Commercial Street Boardwalk was chosen as the recipient of the W. Lon Cooper New Construction Award.