This coming weekend is the last weekend to see “The Trial of Juanita,” an original production written   by drama teacher, John Deaderick, and performed by Colfax High School drama students. Deaderick says he got the inspiration to write the play from a plaque on a bridge.

Deaderick tells the story of the incident that, within hours after it happened, resulted in Juanita’s hanging .

Besides the local history angle Deaderick says  it’s a remarkable story that has never been told dramatically before, and they are doing it as a musical.  Deaderick’s drama classes are very popular and he says there will be 75 students in the production. Performances  are May 8, 9, 10, Thursday Friday and Satrday nights at 7pm and a Saturday matinee at 2pm at the Colfax Performing Arts Center. Tickets are $10 adults, $5 students. 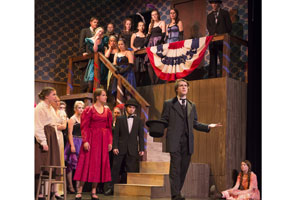 The Lawyer Pleads his Case. 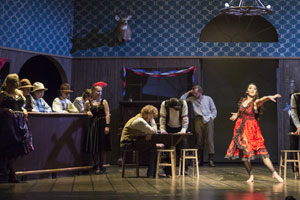 My granddaughter, Jorji, had a wonderful part (til the very end...) Thank you so much for letting her show her talent and beauty on stage. Her family adored the show and of course her good friend Hannah starred beautifully.