An interesting development has occurred since we ran a story yesterday about Nevada City Police Department getting a new Canine Officer. The dog, who’s name is Rudiger is being totally supported by private funds and Police chief Tim Foley says the community is really stepping up to offer donations.

Foley says anyone who would like to make a donation for Rudiger needs to go through the Western Nevada County Canine Association,   PO BOX 2174,   Nevada City CA 95959.

The  checks should be made out to the Sean M. Welsh Foundation, with the Western Nevada County Canine Association  written in the memo line. Foley says all  monies donated are tax deductible.

The Sean M. Welch Foundation has also graciously offered to support Rudiger by accepting the public’s donations and then allowing Nevada City Police Department to have access to the funds to support the canine program.

As for Rudiger, he is now 18 months old, has finished his initial training and is now certified through the Police Officers Standards and Training as a patrol dog, and he will be going back to school shortly for additional training in narcotics detection. A Chevy Tahoe was purchased and the vehicle has been completely outfitted with state of the art equipment to make sure that Rudiger is safe and secure,  even if the air conditioning should go off while the dog is in the car.

click to listen to Police Chief Foley
Funds from the Sean M. Welsh Foundation also made it possible for the Chevy Tahoe to be outfitted for a canine officer. Foley says the  vehicle was just picked up today, and Rudiger will have his public coming out party and swearing in as a Nevada City Canine Police Officer at the August 12th Nevada City City Council meeting. 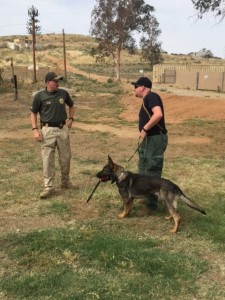