Nevada County Supervisors voted 4-1 yesterday to deny the appeal of a Penn Valley couple on  a management plan for a house and detached garage the couple wants to build on their property  in the 14-thousand block of Pleasant Valley Rd.  Peter Lockyer and Juliet Erickson’s property    borders a Version Cell Phone tower which is under construction on adjacent NID property. The management plan   requires the landowners to deed a portion of their property to maintain a buffer of trees as a visual screen, with responsibility of maintaining vegetation in the restricted area. The county revised the first management plan in July 2012 and the couple filed an appeal on Nov. 13, 2013, which the county subsequently  denied. The Lockyer’s then filed a law suit challenging the county’s decision.   On May 20, 2014 Judge Sean Dowling sided with the property owners and granted their petition to review and reverse the final decision of the  Planning Commission. Supervisor Ed Scofield at the Board of Supervisors  hearing on the appeal Tuesday said the Lockyer’s have resisted working with the county on a resolution and he thinks that’s still the case.

click here to listen to Ed Scofield
Co- counsel for the Lockyer’s, Dennis Viglione testified   the deed restrictions have made it impossible for the Lockyer’s to do anything with their land.

Attorney Michael Colantuono who is assisting the county in the case says The Lockyer’s loose nothing with the management plan.

click to listen to Michael Colantuono
During the revisions of the Management Plan  it was also determined by the County that the Lockyer’s property was on a “Visually Significant Ridgeline,”  becoming the first such designated ridgeline in the county.  Supervisor  Richard Anderson, who says he drove the area to gain firsthand knowledge   cannot agree  with the designation, saying the ridgline is no more significant than other ridgelines in the area.

With the denial of the appeal   the county is preparing  to go to trial with no estimation offered on how much the civil trial will cost the county. A hearing to set the trial date  is scheduled for August 25th. 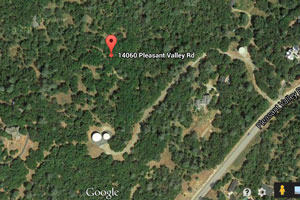