Yesterday was 5th District Supervisor Ted Owens last public meeting in office as his term expires at the end of the year.  The County Board of Supervisors presented the East County Representative with a Certificate of Recognition. 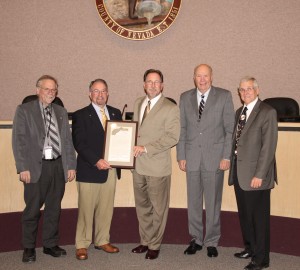 The Nevada County Board of Supervisors takes great pleasure in    recognizing Ted Owens for his outstanding service as Fifth District Supervisor.

Ted was elected in 2004 and re-elected after running unopposed in 2008.  He served as Board Chair in 2005, 2008 and 2012.  He served on the Budget Subcommittee, the Local Agency Formation Commission, the Northern Sierra Air Quality Management District Board, the Land Use Efficiency Committee, and the Governing Board of the Sierra Nevada Conservancy.  He was also Nevada County’s representative to the California State Association of Counties Board of Directors, and to the National Association of Counties.

Under his leadership in his three terms as Chair, Ted brought a new level of respectful and civil discourse between Board members and with the public, and championed a stronger order and decorum protocol for the Board’s public meetings. While being one of the strongest advocates ever for the eastern County and the Town of Truckee, his efforts also extended to the remotest areas of his District.  He helped the Washington Water District obtain County surplus vehicles for the fire department, and a $1.5 million grant to upgrade and reform its water system and management practices. When frozen pipes burst and flooded the Truckee Donner Senior Apartments, site of daily meal preparation for the Truckee/North Tahoe Meals on Wheels programs, Ted worked closely with the building owner and the contractor to ensure that extensive damage was repaired and meal production was uninterrupted.  Throughout his term, Ted never lost sight of his responsibility to ensure openness and transparency of government and fiscal accountability for the taxpayers’ dollars, and scrutinized every County expenditure.  To ensure that District 5 residents see a fair return on their sales and tourism taxes, in 2009 he and Supervisor Weston proposed a “New Model” for County spending on economic development.  In the ensuing years, the County’s contracts for economic development have been more closely tied to performance measures that include collaboration between East and West County. Despite being a fierce advocate and voice for the Fifth District, he never lost sight of the big picture and what was best for the County as a whole. His fiscally conservative philosophy, along with that of his colleagues, created a stable fiscal foundation for the County organization, as evidenced by County reserves growing from just under $10 million in 2005 to over $20 million during his tenure. This is no small accomplishment during these extremely difficult economic times.

Ted worked to strike a balance between protection and preservation of Nevada County’s unparalleled natural resources and reasoned development and diversification of the rural environment.    As a building contractor, he understood the frustrations of the building industry in dealing with onerous or confusing permit requirements.   In seeking a balance between the duty to protect public health and safety and his vision that local government be a partner, and not a roadblock, in community development, Ted initiated the formation of an ad hoc Land Use Efficiencies Committee (LUEC) with members of the Community Development Agency and the contractors’ association.  The LUEC was instrumental in streamlining processes within the Agency that have gained the support and praise of the building community and the general public.   Ted was also committed to providing direct personal assistance to those who sought his help with issues of concern or with their interaction with county government. He was skilled at finding common ground and workable solutions between parties of differing opinions.

On this day, December 11, 2012, the Nevada County Board of Supervisors does hereby express its gratitude and deep appreciation to Ted Owens for his contributions, dedication and outstanding service to the citizens of Nevada County as Fifth District Supervisor and thanks him for a job well done on behalf of a grateful community.

Where did he stand on the Airpark safety commissions proposals for a safe strip between the Airpark and future development?