After listening to 5 hours of public testimony on predominantly why they shouldn’t do it….the Nevada County Board of supervisors voted 4 to 1 to adopt an urgency ordinance that bans outdoor growing of marijuana and also voted 4 to 1 to put the item on the June 7th  ballot to give the public the option to say if they oppose or are for it.
Supervisor Richard Anderson who represents the eastern side of the county dissented on both votes.

Newly elected Chair of the Board, Supervisor Dan Miller explained the ban would not criminalize the growers, it is a nuisance ordinance. Sheriff Keith Royal told the audience if we don’t do something before March 1st and AB 21 doesn’t pass, the state becomes the licensing authority and we would loose local control. AB 21 is the bill that would lift the deadline for local agencies to create their own local regulations on Marijuana. The Sheriff explained the urgency ordinance.

The current ordinance is complaint driven, meaning the Sheriff’s Department only responds when others complain about a violation. Royal says last year, they were only able to respond to about half of the complaints.

Supervisor Hank Weston said he is concerned about the medicinal needs for people in the county, but has also heard that a majority of the marijuana grown here goes out of the county.

Local parent Forrest Hurd made an impassioned plea for his 8 year old son Silas who suffers from epilepsy. He says his son has stopped having seizures with the use of medical marijuana.

click to listen to Forrest Hurd
Don Bessee, the Executive Director of SAM Nevada County, or Smart Approaches to Marijuana said this is about local control. He stated the real issue is that the neighborhoods have had enough and SAM supports the sheriff’s proposal.
Patricia Smith , the local ASA or Americans for Safe Access Chapter President compared the outdoor grow ban to prohibition. She says the ban is a bad idea and doesn’t allow time for transition, and some patients may be left without their medicine.

Smith says setting up an indoor grow operation under the new guidelines could take many months to a full year before production could be done. What, she asks  are patients to do in the mean time?
Royal’s proposal would allow indoor grows to continue for medical marijuana, but limit the number of plants to 12. The county currently has an ordinance that has allowed outdoor cultivation since 2012, but Royal says things are different now. 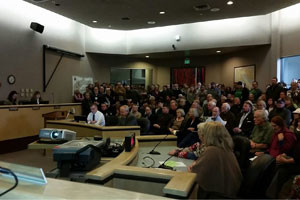