The Nevada County Board of Supervisors today (Oct. 23) recognized the community and international service of local young people who are members of Interact, the Rotary International sponsored service organization for youths ages 12-18.

The Interact clubs of western Nevada County have more than 60 youth members whose actions exemplify Rotary’s motto of “Service Above Self.”  The Nevada Union High School Interact Club was chartered in 1997 and the Lyman Gilmore and Seven Hill middle school clubs were formed in 2010.

“Our western Nevada County Interactors have been an inspiration to those of us who have worked with them,” said Lindy Beatie, president of the 49er Rotary Breakfast Club of Nevada City.  “We’ve watched them grow in their dedication to their community and to the world peace efforts of Rotary International.” 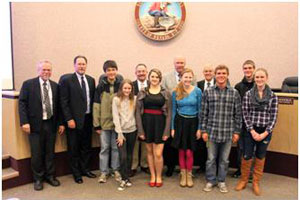