Sheriff deputies patrolling in the area of Rough and Ready Highway and Adams Avenue spotted a vehicle being driven by a male subject familiar to local law enforcement with one other passenger. As officers attempted to follow the vehicle it disappeared from sight. Deputies began a foot search of properties on Adams Avenue and spotted the vehicle and  a young woman walking towards them from a barn. Sheriff Keith Royal says the woman, 21 year old Chellsie Ortega told deputies she was retrieving personal property from the barn and had permission from the owner to store some items. However, her story didn’t check out when officers spoke with the owner.
Click here to listen to Sheriff Keith Royal 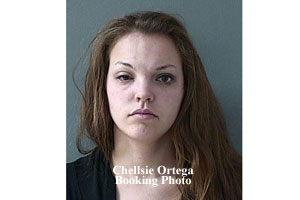 Officers then contacted the male, Marc Silva age 46, parked next to pickup truck behind the barn. While talking to Silva they notices an item in the bed of the truck.
Click here to listen to Sheriff Keith Royal

Both Silva and Ortega denied the items were theirs. Officers then looked into Silva’s vehicle and found several small quantities of marijuana and a box of ammunition.

When questioning Ortega about the items she ultimately said the methamphetamine and paraphernalia was hers- but then said she was intimidated by Silva to take ownership. She also told deputies the gun was in a wet box in the barn.
Click here to listen to Sheriff Keith Royal

Both Silva and Ortega were arrested on a variety of drugs, weapons, and conspiracy charges. Silva was also charged with intimidating a witness.