All units were dispatched and responded to a report of a vehicle accident in the vicinity of Colfax Ave and Ophir St in the city of Grass Valley at 11:30 Friday night. . Units arrived to find 2 vehicles with major damage, one of the vehicles, an early model limousine had been split into two sections. The other vehicle was a late model BMW with major front end damage.

Colfax Ave was closed for approximately 1 hour while the vehicles were removed and the roadway was cleared of debris. the identity of the occupants was not disclosed.
—— 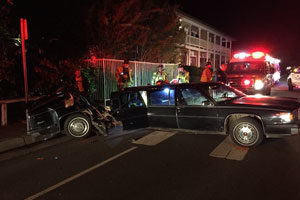