As the son of a World War II veteran, the anniversary of D-Day pulls at my heart.  I once heard a aerial photo interpreter discuss the photo’s of that “Longest Day”.  What he said made an impact, “Every dot is a man standing, every line is a man down.”  From overhead of one small section of just one of the landing beaches, take a look at what bought us the beginning of the end: 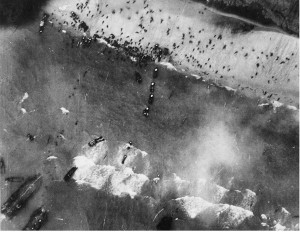