A resolution authorizing the Nevada County Sheriff to renew an agreement with the Department of Justice Drug Enforcement Administration for Domestic Cannabis Eradication and Suppression was pulled for comment from the Board of Supervisors consent calendar Tuesday morning by public request. 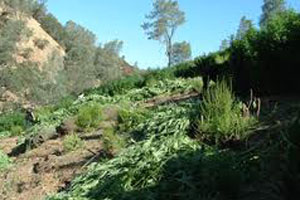 For more than 20 years the Nevada County Sheriff’s Office has worked with  the D-E-A  to locate and remove illicit marijuana grows,  mostly on public land that are in violation of state and federal law.   But Martin Webb of Penn Valley, who was invited by the sheriff to  participate in the working group to draw up  a County Medical Marijuana Ordinance, in public hearing today said Sheriff Royal would use the federal funds  to investigate county medical marijuana growers, which drew a quick  response from the Sheriff.

The Sheriff later apologized to the Board and audience for loosing his  patience.

Since the last contract with  the D-E-A was renewed,  the county has adopted a Medical Marijuana  ordinance that outlines provisions for medicinal  cannabis  to be grown while not becoming a nuisance to neighbors.  Attorney Stephen Munkelt asked the Supervisors  if the agreement wouldn’t  require the sheriff to report medical cannabis growers to federal agencies?
click to hear Stephen Munkelt

Supervisor Nate Beason grilled the Sheriff for clarification that the federal grant funds would not be used to go after county medical marijuana growers.
click to hear Supervisor Beason

Fly process refers to aerial surveilance for marijuana grows.   The  agreement with the federal government provides the sheriff’s office up to $45 thousand dollars from the Drug Enforcement Agency  which may be used for salaries, and rental of vehciles and equipment  in  the eradication and suppression of illlicit cannabis.   The motion to approve  was passed on a 4 to 1 vote with supervisor Lamphier voting No.  The term of the agreement is between January 1, 2013 and December 31, 2013.

This article does not give the context of the issue brought forth today.

To clarify, yes the funding has been in place for 20 years but it clearly stipulates that none of the funding can be used by Nevada County to monitor compliance with local regulations or the entire funding will be rescinded, and a new local regulation was just enacted last year, so this is a new issue.

Because there was never a local ordinance in place until last year (that would conflict with this funding), the whole question today was: with a new ordinance in place that can't use the DEA funding for compliance, what specific things were put in place by the sheriff last year in order to make sure the funding wasn't misused, and what specific things are they doing this year to make sure Nevada County doesn't lose all the funding due to (even accidental) misuse?

In response, the sheriff offered no specifics on how to keep the funding separated, just said to trust him.

My comments at the meeting were a slip of the tongue that the Sheriff jumped all over before I could correct myself. I meant to say he says he intends to NOT use the funding for the ordinance, but it came out the opposite. If you listen to the recording you can hear me try to correct it by saying I misspoke but he is losing his decorum so much that he can't even hear me say it was a verbal typo. Guess we need more deputies at these mtgs to keep the peace and make sure the sheriff doesn't disrupt the speakers...signed, Martin Webb

Actually re-listened and I didn't misspeak, he misunderstood. My words were (paraphrasing): the feds say it can't be used to enforce the ordinance and the sheriff intends to use it that way, which is to say: he intends to not use it for the ordinance. He interrupted me so fast he didn't even wait for me to finish my sentence and my point. When he flew off the handle, I couldn't figure out why he was twisting my words, but now I see how they can be misunderstood. His outburst was totally unnecessary.

You were correct in reporting that ASA-NC supports the eradication of large illegal grows - especially on public land. What wasn't reported is my concern that this agreement with the DEA MANDATES that EVERY piece of information from every investigation MUST be turned over to the FEDS. This would include marijuana cultivation sites that are legal under state and local regulations. Sheriff Royal promised not to turn over info if the grower is in compliance. We shall see.

It's ironic that all the anti-Big Government Republicans on the BOS just voted for...guess what?... more BIG GOVERNMENT.

It should be noted for context that mr webb was bounced off the citizens adivsory group for his verbal attacks on then Supervisor Ted Owens, Sheriff Royal and the citizens advisory group. As a member of the gorup I found mr webb's agenda to be obstructionist and not interested in balancing the rights of home owners and 'patients'.

The issue here is NOT Mr. Webb! It should also be noted for context that Don is facing a recall himself, and his verbal "conflicts" with the medical cannabis patient community is well known. Shame on you, Mr. Bessee, for focusing on your personal opinion of an individual in your attempt at obfuscating the real issue (as seems to be your habit).

It should be noted for context that I was indeed not invited to the final extra mtg of the working group: the one that the sheriff didn't want but the BOS insisted upon.

No reason for my dis-invitation was given, so Don draws his own conclusions, but my comments at the BOS mtg prior to the dis-invitation were that the working group was not very functional and needed more input, so they listened and agreed with my sentiments, and forced the sheriff to call one more mtg. So they listened to me, but the sheriff didn't want to hear any criticisms, so he didn't invite me to the extended mtg. I'd say it's because I told the truth that he didn't want anyone to hear. The supes sure believed me.

As far as Don's personal attacks on my character, Don Bessee could not tell you what my agenda was, because he was one of the many extreme prohibitionist people there from Alta Sierra that didn't really care about balance or mature dialogue or listening. What is my obstructionist agenda, Don? Please explain and provide specific details on my agenda, not hyberbole and exaggeration.

My approach is more balanced than anyone from Alta Sierra and law enforcement, simply based on how I would've made sure the working group was made up of knowledgeable balanced individuals. The first mtg attendees with A.S. connections: Ed Scofield, Lee French, Don Bessee and Michael Straight. So out of 12 members of the public invited, 1/3 were from one small area, supposedly repping the whole county. The supposedly objective real estate agent touted on the sheriff's ordinance webpage? He's been friends with Ed Scofield for decades and worked on his re-eelction campaign. Hmmm...not very objective perhaps.

My favorite comment from Don at the start of the first Working Group mtg: "We all know everyone's selling it!" Um...you should probably share all that evidence with the cops, Don. And how did you gather it? Implying your fellow Working Group members are criminals breaking state law is not a balanced agenda...I'd say it's even obstructionist.

See you at the next mtg, Don!

For the record on why I voted against the grant:
a)
"1. THE AGENCY (sheriff) will...d. Make arrests and refer to the appropriate prosecutorial authority cases for prosecution under controlled substances laws and other criminal laws."
When I asked if marijuana was a controlled substance, the answer was "yes"
b)"10. THE AGENCY acknowledges that arrangements have been made for any required financial and
compliance audits and audits will be made within the prescribed audit reporting cycle."
and...most importantly, sub clause v:
(under clause 10)
THE
AGENCY further understands that its use of DEA funds or the result of expended DEA funds (e.g.
equipment, supplies and other resources) for any use other than the marijuana eradication program
activities, including but not limited to its use directly or indirectly to perform any of the following
functions: (i) issuing licenses, permits, or other forms of authorization permitting the holder to
manufacture, distribute, sell, or use marijuana in contravention of the CSA; (ii) conducting ancillary
activities related to the issuance of such licenses and permits, such as background checks on
applicants; (iii) collecting state or local tax or licensing revenue related to the manufacture,
distribution, or sale of marijuana in contravention of the CSA; (iv) preparing or issuing regulations
governing the manufacture, distribution, sale, or possession of marijuana in contravention of the
CSA; or (v) monitoring compliance with state or local laws or regulations that permit the
manufacture, distribution, sale, or use marijuana in contravention of the CSA, will be a basis for
denial of future Federal funds and/or refunding of Federal funds and may be a basis for limiting
The Agency to payment by reimbursement on a cash basis."

Local attorney Steve Munkelt asked the item to be pulled from consent and attempted to make the point that there was nothing in the document precluding the sheriff from using the funds to eradicate prop 215 and County code compliant grows. County counsel did not agree, but offered no explanation. The sheriff stated his offices would not use the funds in such a manner, stating the Feds are not interested in pursuing medical growers, but no supporting documentation supporting the assertion was available. Other speakers attempted to address the gray area of civil versus criminal interpretations.
I respect our sheriff, who is tasked with a difficult job, but I relied on the written contract over unsupported verbal representations.

Oh, and also from the contract:

"a. Gather and report intelligence data relating to the cultivation, possession,and distribution of cannabis"

Because of all the above verbiage, here's the excerpt of the above re: prohibited actions under the grant funding:

(v) monitoring compliance with state or local laws or regulations that permit the
manufacture, distribution, sale, or use marijuana in contravention of the CSA, will be a basis for
denial of future Federal funds and/or refunding of Federal funds and may be a basis for limiting
The Agency to payment by reimbursement on a cash basis."

"Schedule I controlled substances
Main article: List of Schedule I drugs (US)

Schedule I substances are those that have the following findings:

No prescriptions may be written for Schedule I substances, and such substances are subject to production quotas by the DEA.

Under the DEA's interpretation of the CSA, a drug does not necessarily have to have the same abuse potential as heroin or cocaine to merit placement in Schedule I (in fact, cocaine is currently a Schedule II drug due to limited medical use.)
***
Drugs in this schedule include:

Marijuana including the cannabis plant and its cannabinoids."

Sooner or later we will have to deal with these issues ourselves...
Sending the Feds in to Hassle and arrest innocent medical marijuana users is only going to make relations worse...
Take responsibility ourselves...Govern Ourselves...