Deputy Falls Through Ceiling During Arrest

A Nevada County Sheriff Deputy seriously injured during an investigation during an arrest of a subject not unfamiliar to law enforcement. Local resident, 46 year old Eric Meyer arrested following a search warrant served on an address in the 10000 block Rough and Ready Highway. Lt Bill Smethers officers arrived to see individuals in the area of a garage. Four people were initially detained. 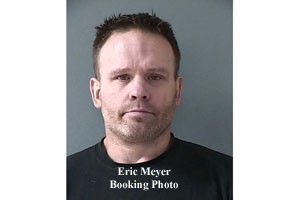 Deputies made multiple verbal attempts requesting the suspects to come down eventually spraying pepper spray into the area, but received no response. The Placer County Canine unit was requested and arrived on scene.

A detective then searched the attic and an unfortunate incident occurred.

The injured deputy was transported to Sierra Nevada Memorial Hospital with a broken arm and possible concussion.
Eric Meyer was charged with committing a felony on bail, resisting a police officer casing serious bodily injury, possession of a controlled substance for sale.. bail was set at 1,000,000 dollars.