DNA Hit Results in an Arrest for Auto Theft

Going back to July 2nd of this year Grass Valley Police were called to the area of Sierra Nevada Memorial Hospital for a report of a stolen vehicle. Lt. Alex Gammelgard says an area check was initiated but the vehicle was not located. Jumping forward to July 11th at 2 in the morning Grass Valley Police officers on patrol saw the vehicle turning onto Bennett Street .

click to listen to Lt. Gammelgard
The chase was eventually called off due to the unsafe driving conditions of the person in the car. But Nevada City Police set up a perimeter at Nevada City Highway and Banner lava Cap after spotting the vehicle.

The vehicle and items in it were swabbed for DNA and sent to the Department of Justice Crime Lab and the vehicle was returned to the owner. Gammelgard says on November 22nd the lab results came back .
click to listen to Lt. Gammelgard

On November 23rd Gonzales was located by Grass Valley police in the area of Pioneer village and south Auburn street. He was booked into the Wayne Brown Correctional Facility on charges of Vehicle theft, evading a police officer with disregard to safety, 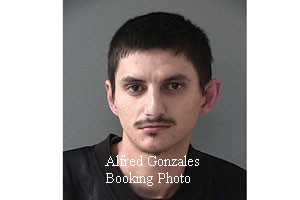