A male subject driving a vehicle with expired registration tags tried to play a game of “hide and seek” with a sheriff’s deputy when he was spotted driving on La Barr Meadows Road Tuesday evening. The suspect driver realized that a deputy had pulled onto the road behind him but had not yet activated his lights. According to Sheriff Keith Royal, the driver quickly turned his vehicle into a driveway.
Click here to listen to Sheriff Keith Royal 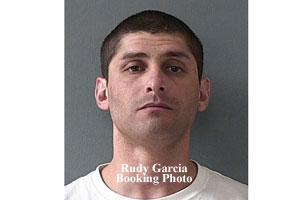 The officer made contact with the driver, Rudy Garcia of Nevada City, and discovered Garcia was driving on a suspended license and as well as being on probation. While speaking with the suspect, the officer also determined that Garcia was under the influence of a controlled substance. Garcia was taken into custody for multiple violations, and his female passenger was also taken into custody on a warrant.