A couple arrested on drug related charges after parking in a closed business on a dark road. A Nevada County Sheriff Deputy making contact with the occupants of the vehicle at 3:15 AM Tuesday after they drove by him parked on Granholm Lane in Nevada City. 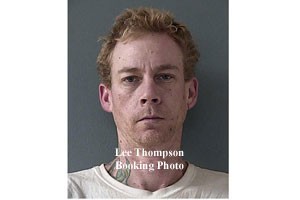 According to Lt Bill Smethers when running the names, Thompson was discovered to have multiple warrants and was also on probation. Thompson was taken into custody and the deputy conducted a vehicle search which turned up a number of suspicious items.

Also in the black pouch was almost 2.8 grams of marijuana and two more needles. A further search located suspected methamphetamine in a container and in a purse.

Lee Thompson claimed that all of the drugs and drug paraphernalia were his, and he was charged with possession as well as arrested on the warrants and probation violation. The female driver, was evaluated by a second deputy and determined to be under the influence of a controlled substance.