One of Nevada County’s hardest working resident has been honored by a statewide organization for her commitment to removing one of the county’s most prevalent invasive plants. Executive Director of the Fire Safe Council of Nevada County, Joanne Drummond, was awarded the 2014 Ryan Jones Catalyst Award by the California Invasive Plant Council (Cal-IPC) for her work organizing the Scotch Broom Challenge. Drummond was nominated for the award by Peter Beesley a past member of the California Invasive Plant Council. 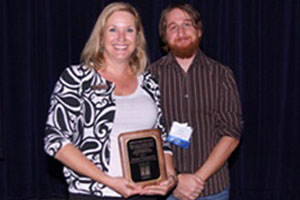 The award is given each year for creatively spearheading actions or creating partnerships that make exceptional progress in protecting California from invasive plants. Joanne Drummond was selected from a statewide process.

Though Drummond was the recipient of the Ryan Jones Award- she quickly gives credit to her support people and community.

It’s estimated that over the seven years that the Scotch Broom Challenge has taken place over 135 acres of Scotch Broom has been cleared.

The Ryan Jones Award is named for an incredible artist and youth leader for the Golden Gate National Parks Conservancy, who died at a young age.