A DUI involved accident was one of several traffic incidents that kept Grass Valley CHP Officers busy Wednesday. The DUI hit and run began with a rear-end collision on Brunswick Road near Woodrose Place. Officer Greg Tassone says that the vehicle that was hit pulled over and tried to make contact with the driver of the subject vehicle. The subject vehicle fled the scene and the victim began to follow it.
Click here to listen to Officer Greg Tassone

The vehicles eventually ended up at an apartment complex on Segwick and Dorsey Drive.
Grass Valley Police joined CHP and attempted to make contact with the subject but they refused to answer the door. Officers could hear what sounded like a person in distress or injured inside.*
Click here to listen to Officer Greg Tassone 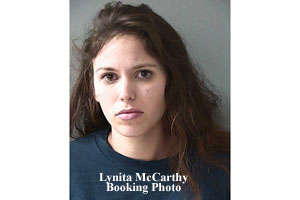 The suspect, 27 year old Lynita McCarthy, appeared under the influence and was taken into custody. It was discovered that McCarthy had a male passenger and a small child in the car at the time of the collision and was driving on a suspended license. McCarthy was booked into the Wayne Brown Correctional Facility for felony DUI, felony hit and run, willful harm to a child, and driving on a suspended license.

Since no injuries were involved, it was a misdemeanor rather than a felony.