A female victim had finally had enough and turned a suspect  in for physically assaulting her over a period of time. Nevada County Sheriff Keith Royal says that the woman called his office and wanted to meet and speak with officers.

The victim had obvious signs of abuse including bruises, abrasions and lacerations on her shoulders. When deputies attempted to make contact with the suspect, 23 year old Zachary Alley, he refused to open the gate to the property and went inside the house. 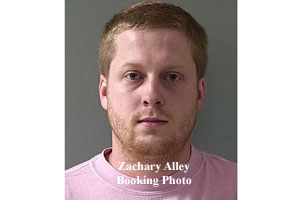 Alley was taken into custody at that point. During the investigation it was also determined that Alley had made threats against the victim and her family and that is why she waited to come forward.*

Alley was charged with inflicting corporal punishment on a cohabitant, making terrorizing threats, and attempting to dissuade a witness or victim and is being held on 250,000 bail.

Coincidentally the suspect also drives a white ford ranger matching a description of a hit and run on Highway 49 near North San Juan. CHP were called to investigate but it was determined not to be the suspect vehicle.