Firefighters were dispatched to a structure fire at 5:00 am this morning on Hwy 49 and Pleasant Valley Road across from Petersons Corner.
Dispatch received a call for a roof on fire, but the two-story commercial structure was fully involved when the first unit arrived on scene.there was a slow moving grass fire on the backside of the house that was extending to the outside of an outbuilding.  The grass fire and the out building were quickly extinguished and Firefighters attacked the main structure together. Firefighters extinguished the top floor without any extension to the downstairs.  As firefighters attacked the fire there was a salvage operation going on downstairs.  Cars that were parked close to the structure were moved and the contents of the downstairs were moved out and protected with tarps.
North San Juan Fire, Camptonville Fire and CAL FIRE units responded to the incident. CHP helped with traffic control.
Units still remain on scene, the cause of the fire is under investigation. The cause of the fire MIGHT have been embers from the wood stove that landed on the roof. 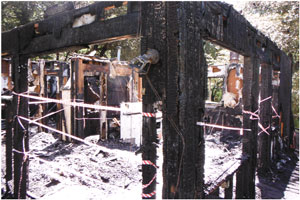 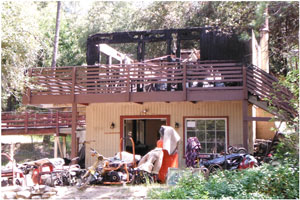 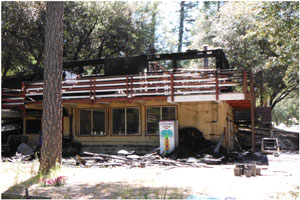