Yesterday afternoon at the Empire Mine State Historic Park visitors center a man  smashed the plexiglass donation box,  grabbed the money inside, and took off. Nobody was harmed.  Park Rangers ran after the suspect  but he eluded them . At that time it was unclear if he was armed.   The suspect was spotted later near Memorial park and Grass Valley.  At that time  law enforcement activated  the Neighborhood Alert system and was contacting residents in the vicinity of Memorial Park, Magenta Drain and Hwy 174.  Police   joined State Parks Rangers in the search for the suspect  with assistance of  a helicopter and k-9 unit.  Meanwhile, park rangers found the pick up that was stolen from the Food Bank the previous night. It was  parked on a private driveway between Race Street and Empire Mine. Police says its  now believed that the suspect from the Empire Mine robbery also broke into the Food Bank Monday night and stole their  pick up  and  drove the truck to the location near Empire Mine.  Grass Valley Police Sgt. Steve Johnson says they now have an identity of the suspect.
click to hear Sgt. Johnson 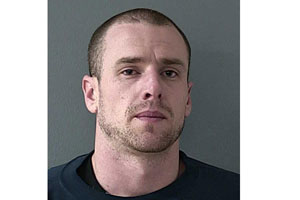 As of this morning Allan Pollock is still at large and  anyone with information about his whereabouts is asked to contact Grass Valley P.D.

I see no justification for helicopters and 6 law enforcement agencies to spring into action in this case.

What is going on here? Seriously. So the man seems to be desperate and hungry. What drove him to the point he is at now? And why does our local law enforcement feel the need to blow this situation way out of proportion?

So if he can't steal money from a tip jar what makes you think he won't rob someone or break into someone's home?

I am sure if you got robbed your bleeding heart would feel very differently.

I'm so glad that he was caught,thank you to all involved!!! He shouldn't have to worry about eating now!!