The Engineers Association of Nevada County  has recognized the Nevada Irrigation District with two top awards.
NID’s mercury remediation project at Combie Reservoir, an innovative effort to remove buried Gold Rush-era mercury from the watershed, was selected as the association’s 2015 Project of the Year.
NID Assistant General Manager Tim Crough, who is heading up the remediation effort, was named as the association’s Engineer of the Year.
“We were very impressed by NID’s collaborative effort with the Sierra Fund and others to plan and develop funding for the project,” said EANC President Richard Peevers. “Mercury is a fairly significant issue in many areas. The NID project will not only remove mercury but it will allow NID to reclaim valuable water storage space.”
He said Crough’s efforts through recent years and commitment to the mercury remediation project earned him the nod. “He’s been the driving force behind the project; he’s making it happen,” said Peevers.
Members of the association nominate projects and individuals for the annual awards with the final determinations made by the EANC Board of Directors. Peevers said members were able to tour the project site and were impressed by the operation.
The honors were announced Dec. 16 at the annual EANC awards luncheon in Grass Valley.
NID has been actively pursuing the mercury removal effort since 2007 and continues to seek state and federal funding for its completion. The effort is part of the district’s work to remove sediment that washes down the Bear River and takes up valuable water storage space in Combie Reservoir.
The Engineers Association also recognized NID in 2012 when the Banner Cascade Pipeline Project and project manager Brian Powell received awards. 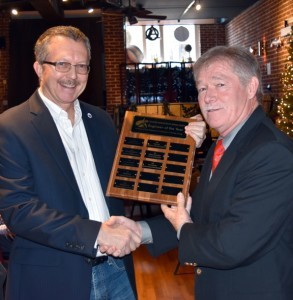 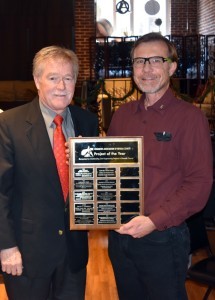