If you are going to steal a car it’s a good idea not to take a picture of yourself with the vehicle and post it on Facebook. Grass Valley Police Lt. Alex Gammelgard says the series of events began three weeks ago when Grass Valley Police received a call that a 1966 red Ford mustang had been stolen . The owner of the car had left it with a friend to drive while she was gone and he had picked up a friend while he was out driving the car.

The individual who was in charge of the vehicle went to bed for the evening and in the morning found his friend, Alfred Gonzales,  was gone  and so was the car.  At that point he contacted the owner who then contacted Grass Valley Police.

Gonzales had posted his picture with the Mustang on Facebook with the message, “Check out my new ride.”
Monday night of this week Gonzales was located by police in downtown Grass Valley and he was arrested for possession of a stolen vehicle. The Ford Mustang has since been located in Nevada city and returned to the owner. 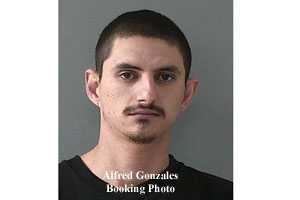 So shocking!!!. not right he not that kind of person... Haven't known him long, but he is not a thief.... I have left him sitting in my car with keys in it multiple times....something not right about this......