Fairgrounds Board to Discuss Elephant Ride

The Nevada County Fair theme this year, Under the Big Top, is based on the circus. And when people think of a circus, elephants often come to mind. As part of the fair, the Nevada County Fairgrounds Board has entered into an agreement with Have Trunk Will Travel, a notable company that provides elephant services for entertainment purposes. Program Manager for the Center of Animal Protection and Education in Grass Valley, Shelley Frost says her organization is not happy with at that arrangement.
Click here to listen to Shelly Frost 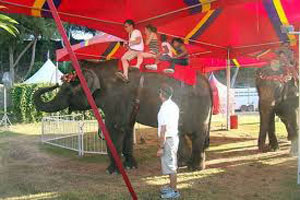 O’Sullivan states that Have Trunk Will Travel has a spotless safety record and legal challenges and reviews by authorities responsible for monitoring the company have all been favorable.
Click here to listen to Paul O’Sullivan

According to FOXnews.com an elephant related accident in 2009, not associated with Have Trunk Will Travel, occurred at the Indiana State Fair when an elephant was spooked and stumbled knocking over a a mobile stairway. 15 children and 1 adult in on and around the stairway were treated on location.

Bad idea. Don't do it

Thank you to KNCO and Paul Haas for covering this important story. KNCO should send a reporter to the meeting on Thursday during for a follow up on the final decision of the Nevada County Fairgrounds Board of Directors regarding the contract with Have Trunk Will Travel.

How, exactly, is this different from the pony rides except bigger..maybe?

Beyond the speculation of the cruelty to the elephants by the Have Trunk Will Travel company, and even beyond possible safety issues for the public, is the issue that elephants are not made to carry heavy loads on their backs. Unlike a horse, where the curvature of the spine seems to be designed for riders and/or loads, the curvature of an elephant's spine is the exact opposite. They should not be ridden in the manner that that companies like Have Trunk Will Travel is providing. If they must be used to draw revenue to the fair can't we just pet them or feed them?