A couple arrested after allegedly stealing a family ring and selling it to a pawn shop. Sheriff Keith Royal says the sequence of events began when the victim called the office reporting the theft.

Royal says that the pawn shop was contacted and the store did record a transaction regarding the ring. Unfortunately, the ring had already been melted down. The store had a photo of the ring and paperwork from the seller.
The victim identified the ring and also recognized the name on the paperwork as his daughter’s. 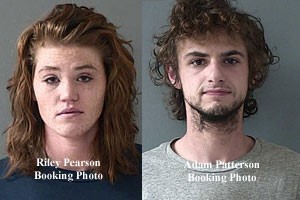 The value of the ring was listed at 2000 dollars. Pearson and Patterson sold it to the shop for 240 dollars.