The FBI is seeking the assistance from the public to identify an individual suspected of three bank robberies in Northern California. In each of the robberies, the suspect carried a cross-body men’s bag strapped tightly to his body, a white, button-front shirt, and loose-fitting black or dark colored slacks. He has presented the teller with a demand note and displayed a silver semi-automatic handgun when making his demand for cash and fled on foot after the robbery.

·         At approximately noon on Saturday, April 12, 2014, the subject entered the US Bank at 903 Colusa Avenue in Yuba City while wearing a black or dark fedora. He had medium-length hair that was tied back into a pony tail, and was unshaven.

·         On Monday, April 21, 2014, at approximately 2 p.m., the subject entered the Rabobank at 1600 Butte House Road in Yuba City while wearing a black or dark-colored ball cap with an offset logo. The suspect looked like he had recently had his hair cut and was clean-shaven.

·         On Friday, April 25, 2014, the suspect entered a Rabobank located at 900 Mangrove Avenue in Chico. During this robbery, the suspect wore a similar black or dark colored ball cap with an offset logo and was again clean shaven. 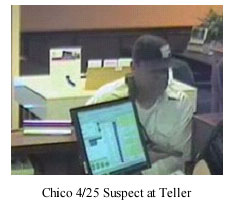 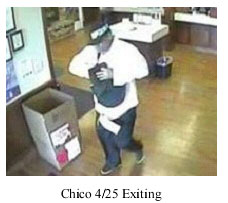 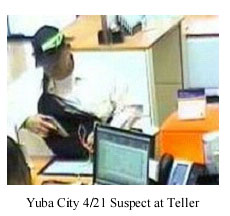 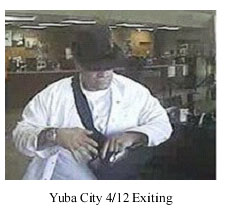