In a story that went from bad to worse, and even more worse…
A female inmate at the Wayne Brown Correctional Facility was caught hiding drugs and paraphernalia on her person inside the jail. The inmate, Kaitlyn Sulley age 30, had been arrested during the bust at a Grass Valley Motel Friday morning. According to Sheriff Keith Royal Sulley had hidden the illegal items on her person.
Click here to listen to Sheriff Keith Royal

The protocol in this type of situation is to place the inmate in a cell without a toilet so that when they do remove the  items they cannot hide it or flush it. The jail staff also learned that Sulley had been distributing methamphetamine to other inmates.
Click here to listen to Sheriff Keith Royal 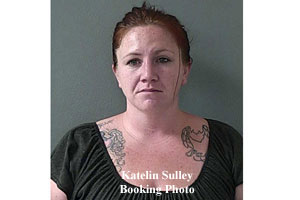 Later that night Miss Sulley became ill and needed to be transported to the hospital as a result of an overdose of methamphetamine she had ingested while concealing it from officers.

Sulley was charged with poisoning food or drink and giving it to someone without their knowledge; additionally for possession of a controlled substance and paraphernalia inside a jail facility.