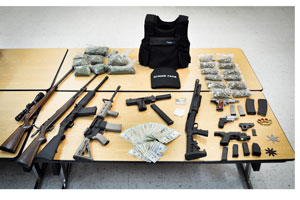 At least one pistol is confirmed stolen and Sgt Johnson expects other firearms to be confirmed stolen as well. The juvenile also had another item of concern to the investigating officers.
Click here to listen to Sgt. Steve Johnson

According to Nevada County District Attorney, Cliff Newell, Wallace will be tried as an adult.
Click here to listen to DA Cliff Newell

Additional charges related to the drugs and weapons found in Wallace’s bedroom Thursday will likely be filed as a separate case.