A 61 year old man is in jail following a fight with his 59 year old brother that led to the injury of their 81 year old mother. According to Nevada County Sheriff Keith Royal the suspect Gary Castor had returned the the family’s residence after he had been drinking and appeared angry and agitated. 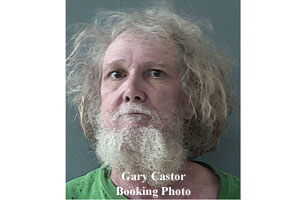 Castor then kicked in a bedroom door and physically confronted his brother who pushed him away. At this point the mother tried to calm her son.

Sheriff’s deputies responding to the call saw the mother had a substantial gash on her head from being hit with the ashtray.
Gary Castor was taken into custody for willfully causing harm to an elderly victim.