Concerns were raised when citizens in Grass Valley first heard and then saw the red and white fire fighting helicopter from Sac Metro Fire Agency swing low over the city and then land somewhere near Sierra College. However concerns were quickly alleviated when it was pointed out that the helicopter was part of Kids Fire Camp taking place at Grass Valley Fire Station #2. KNCO’s Paul Haas caught up with Nevada County Consolidated Fire Captain Kevin Minnett. 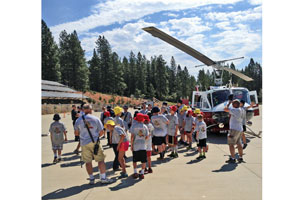 The camp, put on by the Local Figher Fighters Union 3800, is a five day event where 30 campers are put into 5 battalions and experience various aspects of fire fighting while also having a fun competition at the same time. 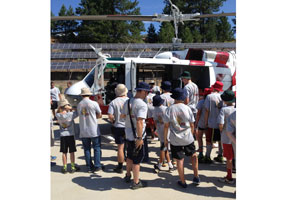 One camper, Stephen, say he likes the activity where they use ropes to do rescues.

Another camper, McKenna, was enjoying time with her firefighter father while also learning skills.

The camp wraps up tomorrow with the family lunch, muster competition and graduation.
Local 3800 volunteers all of their time and reimburses or replaces any resources that are used during the camp so it is not an added expense to any of the supporting fire agencies.