Fire in NSJ Held to 2 Acres

Nevada County Sheriff’s Deputies were called in when fire fighters learned of the possible shooting. Deputies are investigating why one of the people involved was so badly injured he was taken to Sutter Roseville Hospital by a Cal Star helicopter. 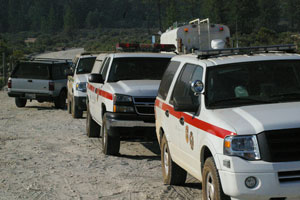 Cal fire says this fire was human caused and is under investigation by Cal Fire and law enforcement.

Isn't this the same guy that set two other fires in the last month on the fire access road?