Two of the three candidates for State Senate District 1 showed up for a candidates forum hosted by the League of Women Voters last evening at the Rood Center. Incumbent Ted Gaines was the missing candidate. He was invited to participate but declined. Steve Baird, who lives in Shasta County says he’s running because he feels rural counties are under represented, and he would like to change that.
click to listen to Steve Baird
Candidate Rob Rowen who also lives in Shasta County calls himself a moderate Democrat . He says he decided to get into politics 4 years ago and believes rural California can make a resurgence.

Where they differ is on the issue of climate change. Steve Baird says Climate Change is false Science.
click to listen to Steve Baird

He says Californians are being punished by the State regulations on Climate Change.

Both candidates also gave their opinions on jobs, gun control, water storage, the minimum wage and the State of Jefferson movement. Rowen says he is not a fan of the Jefferson movement, Baird says he would support it if elected. Both candidates say they oppose the high speed rail project and believe the state’s prison system is not working well.
— 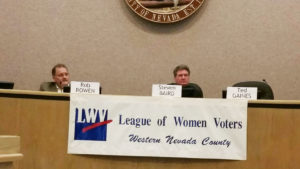