Nevada County Sheriff Keith Royal says a substantial amount of heroin and methamphetamine was taken off the streets early this morning with a traffic stop that lead to four arrests. A deputy on patrol at 4am at Gold Flat and Grandholm in Nevada City noticed a truck stopped in the center of the road with four people inside. He motioned for them to pull over.

The deputy identified the people in the car as Marc Silva, the driver, Thomas Bailes, Shaneen Moore and a Marcus Brewer, and found that several of them had controlled substances on their person and warrants for their arrest. They were taken to jail and, after being admonished there would be an additional charge for taking controlled substances into the jail, Moore was found to be in possession of suspected methamphetamine.

Moore also had a warrant for her arrest on a burglary charge in Sutter County, and she was in possession of several keys and burglary tools. 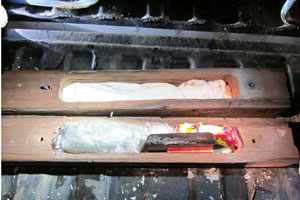 In the back of the pickup, deputies also found a piece of wood that had been cut in half   and secured with lag bolts.  When deputies removed the lag bolts  and opened the two pieces of wood, they found a large quantity of heroin, methamphetamine and syringe needles hidden inside.