Two subjects arrested for battery and two arrested for weapons and stolen property Friday. Nevada County Sheriff deputies responded to a report of a physical altercation at a Quail Creek Drive residence in Grass Valley around 9:00 AM. According to Sgt. Jeff Tyner, deputies learned two male suspects had attacked a single male.

Deputies ultimately determined that Ulugalu and Rey were the aggressors and were taken in to custody for Battery. 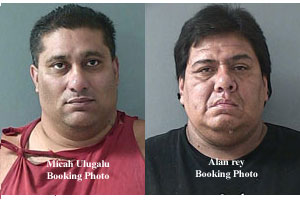 Eric Meyer refused medical treatment but found himself being transported for another reason. Deputies located a number of weapons inside the residence.

Eric Meyer is an ex-felon and should not possess any firearms.

Sgt. Tyner also noted that deputies had responded to the same residence twice the night before on 911 calls about weapons at the house.