A familiar face to local law enforcement found himself in trouble twice in one morning. The first incident began when police were called to a bar for an unruly suspect on West Main Street in Grass Valley shortly after 1:00 AM Tuesday. Lt. Alex Gammelgard says officers responded to find the suspect, Johnathan Pattee, outside of the bar. 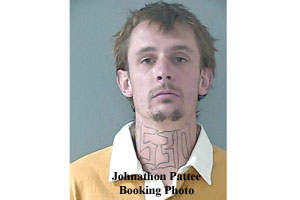 Several hours later, just after 8:00 AM, another call came in of an individual behaving strangely in a parking lot on East Main Street. Officers arrived to discover Pattee in the lot.

Officers witnessing the suspects behavior made contact with Pattee and determined he was under the influence of a controlled substance.
Pattee was taken into custody and re-booked into the Wayne Brown Correctional Facility; this time for being under the influence and violation of his Post Release Community Supervision from a prior conviction.