An accident at a gas station in North San Juan yesterday (Sunday) afternoon could have been a lot worse. North San Juan Fire Battalion Chief Boyd Johnson says a driver pulling in for gas at the Sierra Stop station either didn’t see or chose to run over a gas tanker hose that was filling an undergound tank. 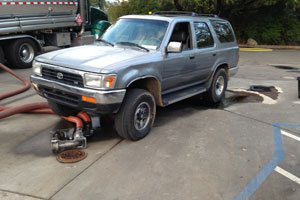 The hose ruptured and began spewing gasoline and 40 gallons ran onto the pavement. The spill created an environmental hazard and firefighters began putting down absorbent material.

Johnson says it was a brief scare but it worked out pretty well that they got the spill cleaned up. The Sierra Stop is the only gas station in North San Juan and it had to be closed during the clean up.