A book considered  one of the most important recent contributions to Gold Rush history is the subject of this months  Nevada County Historical Society’s  Speaker Night presentation Thursday  night, April 18.
The Gold Rush Letters of E. Allen Grosh and Hosea B. Grosh,   based on 80  letters  sent from California to their  father in Pennsylvania speaks of the hopes and frustrations of two young Argonauts who were eternally optimistic as they sought  gold on  Nevada County’s Deer Creek,  then  went on to announce the discovery of Silver  in what was then the Utah Territory.

Co editor Bob Stewart says The letters were considered lost but recently discovered and purchased by   Nevada  for a Quarter of a million dollars.    Stewart and Jones provide extensive annotations and editing of the  80 letters and James provided some 400 notes which add clarity to the letters.
click to hear Bob Stewart 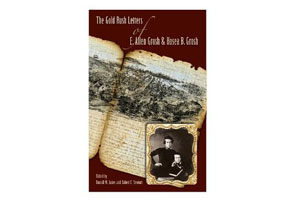 It is very much a story of the Gold Rush, and their Comstock adventures come in the last years before Hosea died on the east side of the Sierra, and Ethan Allen Grosh tried a November trans-Sierra hike, only to die at lonely Last Chance, in the mountains southeast of Auburn.
James, author of a number of books on Nevada history, recently retired as Nevada Historic Preservation Officer. Stewart is recognized in Nevada as a meticulous historical researcher. Copies of the book, published by the University of Nevada Press in 2012, will be available for purchase, and both editors will be signing after the discussion.

Nevada County Historical Society Speaker Night is   Thursday evening April 18th  at the Madelyn Helling Library community room  beginning at 7pm. The event is free and open to the public.