There was a great deal of enthusiasm  and promise for the success of the New Greater Grass Valley Chamber of Commerce  and Visitor’s Center as the grand opening and ribbon cutting ceremonies were celebrated yesterday.  The new center was the vision of Robin and Keith Davies who came up with a plan to promote many of the performing arts and other attractions in the county with a visitors center within the new Chamber offices at 128 East Main St. They now serve as co-CEO’s of the Chamber and Visitor’s Center.
click to hear Robin Davies 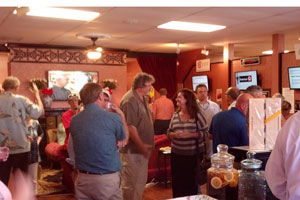 Multiple stations with interactive TV’s promote various performing arts, winery’s  and other sites to see   in the county, Which Grass Valley Mayor Dan Miller says will be a great starting point for visitors to the county.

The 1891 map of the city lists the building at 128 East Main St.  as a carriage shop and next door was a livery stable.  The present owner of the building,  Keoni Allen says it’s true there is a secret passage on the upper floor.
click to hear Keoni Allen

The building is also said to be inhabited by a ghost. According to legend, his name is Miner Mike and he reportedly  took up residence after he was killed in a brawl upstairs in the building.