Tracey’s winning ticket matched the number of the racing duck that emerged from a field of several thousand toy ducks to take top honors in annual event, which is held as part of Nevada City’s Constitution Day weekend celebration.

Winning the $1000 second prize was Jim Hebert of Oakland, while the $500 third place went to Greg Edwards of Penn Valley.  Many other cash and merchandise prizes were also awarded.   Tri Counties Bank won the sponsor’s race and donated the $500 first prize to Hospitality House.

The duck race is sponsored by the 49er Breakfast Rotary Club of Nevada City.  The race is the club’s largest annual fundraiser, providing financial assistance to numerous school, youth and community groups. 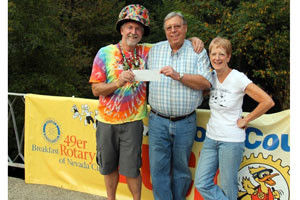