A Grass Valley family lost their home and all their belongings in a blaze that erupted in  their North Church Street house in Grass Valley on Christmas day.
click to listen to NCCFD Battalion Chief Jim Smith 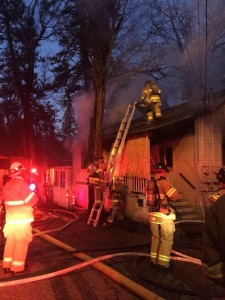 The fire got started in the upstairs unit where Anthony Albisu was the only one home at the time as his wife and son were visiting her parents. No one was hurt, though he was not able to get the family dog and cat out.

The fire is believed to have started in the area of the Christmas tree..
Another couple living in the lower level of the rental did not have as much damage. and were able to get a lot of their belongings out.
But both units are not livable at this time due to smoke and damage from the fire. The Red Cross was not called as both tenants had family or friends to stay with.
Dana Albisu’s sister, Cerissa Blankenship, created a GoFundMe page after she first posed on Facebook about the fire.
The community has rallied and as of this afternoon the fundraising effort  has raised $4,480  for the family.