A Grass Valley man with arrests going back at least three years for multiple vehicle break-ins has been taken into custody yet again. Police Lieutenant Alex Gammelgard says officers recently responded to a report of a car alarm going off on Olympia Park Road. When they got there, they then conducted an extensive search of a number of nearby apartment complexes and business parks.

But a total of 40 misdemeanor and four felony charges have been forwarded to the Nevada County District Attorney’s office, related to other cases. Some of the charges are also for methamphetamine possession and being under the influence of the drug. Gammelgard says most of the thefts have occurred in the Brunswick Basin area. Before this incident, Rushing was arrested early last year and originally faced 21 charges before reaching a plea agreement. He was sentenced to 3 years in prison before being paroled recently. 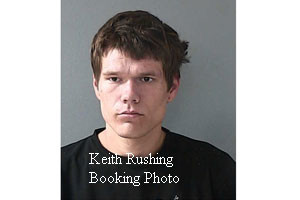