A Grass Valley native is going to be one of the 12 artists competing on the third Season of Skin Wars on the Game Show Network beginning April 20th. Alison Kenyon made the cut to be on the show for a third season. SKIN WARS is television’s first ever body painting competition show that seeks to find the most innovative body painter in America.

Kenyon says she got started painting exotic make up designs in high school, later she joined a circus and got into full body painting.

When she’s not competing in Skin Wars, Kenyon is a mother to her 4 and a half year old son and a childlren’s birthday party expert in the character of Penny the Clown. She says she will launch season three with a special event at Smiley Guys Smokehouse April 20th where people can come watch the show.

The winner of Skin Wars season three will receive a $100-thousand dollar cash prize, a trip for two to the prestigious World Body Painting Festival in Austria and their own line of stencils.
— 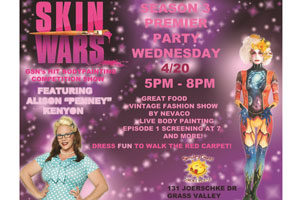