Grimes Apprehended After Attempt to Flee By Water

A suspect that eluded law enforcement twice this week, was taken into custody Thursday evening at Cascade Shores. John Grimes who escaped from the back of sheriff’s car while handcuffed off Ridge Road Monday, and avoided capture by Grass Valley Police on foot in a wooded area Tuesday, was finally taken into custody after attempting a water escape in Scotts Flat Lake Thursday evening. Sheriff Keith Royal says that around 7:00 PM an anonymous tip came in saying Grimes had been spotted in the area of Santa Fe Road near the lakeshore at Scott’s Flat Lake. 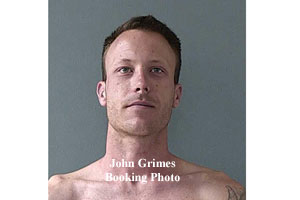 Officers immediately headed over to the boat launch area and made contact with two individuals.

Grimes was successfully transferred and booked into the Wayne Brown Correctional Facility and is being held on 200,000 dollars bail.