A wildfire broke out late Friday afternoon about 8 miles northeast of Nevada City, near the town of North Columbia.  Named the Grizzly Fire, it quickly consumed about 12 acres of forest before quick work by fire crews from the air and the ground stopped it forward progress.   It did put up a plume of smoke visible in the Grass Valley and Nevada City areas.  The fire started just before 5pm and by 6pm, Grizzly Hill Road was closed at North Bloomfield.  No evacuations were ordered.  By 7pm, some of the resources that were heading to the Grizzly fire were being cancelled and tankers from McClellan and Redding were also released.  No word if the fire will have an impact on the Sierra Storytelling Festival scheduled to start Friday evening and continue this weekend in the North Columbia area.  Thanks to Yuba Net for quick updates including photo taken from North Bloomfield Road of fire plume about 6pm by Keaton Hild.

With night coming soon, ground crews will continue to battle the Grizzly Fire throughout the evening.  Units include the North San Juan Fire Department, Cal Fire, Nevada County Consolidated, US Forest Service, even Crews 1 and 3 from Butte County will be working to control the fire.  Expect smokey skies tomorrow morning in the Western Nevada County area. 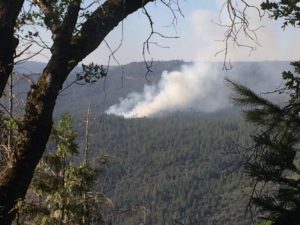