In Nevada County the drone issue has  landed Nevada County Council and  local attorney Lorraine Reich   in court.  Reich, representing county residents opposed to drones, had prepared an ordinance and submitted the draft to the county counsel in preparation of gathering signatures to support  banning  drones from the county, with limited exceptions for law enforcement and fire detection.
Reich argues the drones threaten county resident’s privacy and 4th amendment rights.  County Counsel argued that the proposed initiative is constitutionally invalid in that it is preempted by federal and state law and is beyond the scope of the initiative power, and would be substantially invalid if passed.   The court ruled in favor of the county without prejudice so the defendants can re-write their ordinance to comply with the law and resubmit it if they so choose. 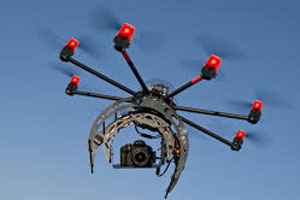 Meanwhile, an Assembly Public Safety Committee hearing this morning will delve into some questions raised about unmanned aircraft or drones.  The Assembly  will hear from Linda Lye of the ACLU on how the surveillance possible with   drones could impact civil liberties.  They will also hear from deputy director of the California Department of Forestry and Fire Protection Andy McMurry, who’s agency could stand to benefit from the surveillance of state responsibility area lands.
The Federal Aviation Administration, which is moving toward a 2015 target for opening the skies for public and private drone use, estimates that more than 30,000 could be in flight nationwide by 2020.  Drones could be used to  sell real estate,   gather video for news organizations,  conduct surveillance  and search-and-rescue operations or to  crack down on illegal drug cultivation and trafficking.

On a side note, Five protesters  who oppose the policy of using drones and who are charged with trespassing at Beale Air Force Base will be going to trial .They were told  by a federal judge that they will not get a jury trial.
Judge Delaney said, based on U.S. Supreme Court precedent, the crime is not serious enough for the defendants to be judged by their peers.  An Aug. 12 trial before Delaney is scheduled for Sharon Delgado, 64, of Nevada City; David Hartsough, 72, and his wife, Janet Hartsough, 71, of San Francisco; Jane Kesselman, 58, of Camptonville, and Shirley Osgood, 65, of Grass Valley.

Osgood and company were protesting at Beale AFB which is home to the U-2 Spy Plane, and the unmanned Global Hawk, an unarmed reconnaissance drone that is an “accomplice” in strikes carried out by armed drones.