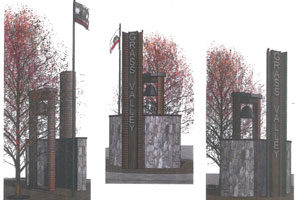 The city of Grass Valley is looking to update its welcoming feel. The City Council voting to move forward with an entryway sign in the downtown area at Tuesday’s meeting. The proposed sign would be constructed at the corner of Neal and South Auburn Street and would incorporate an artistic feel along with some historic elements. Mayor Howard Levine points out the significance of the bell used in the sign.

The sign will also serve as a monument to the Grass Valley Volunteer Fire Department and the only three volunteers that lost their lives fighting fires in Grass Valley.

All councilmembers were in support of the design of the sign, but Lisa Swarthout did not support the addition of a bench suggested by the Planning Commission.

Council directed staff to move forward with getting bids on the construction of the project as the sign was originally designed. Additional seating can be added at a later date.