The second suspect in a car theft that occurred in early February is in custody thanks to Grass Valley Police. Sgt Clint Bates says that the original vehicle theft occurred near Lamarque Court and Brighton Street. Video footage from a neighboring residence identified a potential car the thieves were driving. The stolen car was recovered within 24 hours in the Penn Valley area. Evidence at that scene pointed to a second video system that had captured images of two men, Casey Soward and David Carson linking them to the theft.
Click here to listen to Sgt. Clint Bates 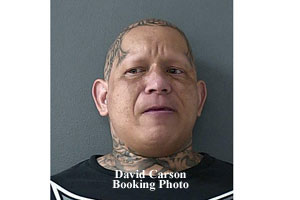 On Saturday, Grass Valley Police located Carson on Richardson Street and were able to take him into custody for his parole violation as well as the car theft. David Carson is another AB 109 early release parolee that was on post release supervision when he allegedly committed the crime.