The next step in the process of implementing Nevada County’s new Medical Marijuana growing Ordinance will move forward with the acceptance of two new hearing officers to be appointed by the Board of Supervisors today, according to Sheriff Keith Royal.
Sheriff Royal says the  two county employees selected  for the job  are Vic Ferrera who is the Office of Emergency Services Program Manager for the County who understands, interprets and applies local, state and federal rules, regulations and laws;  and Mike Sypnicki who is the Probation Department Program Manager for the county with experience in local and state laws, oversees court services for Probation, and makes sentencing recommendations to Superior Court.
Sheriff  Royal says his deputies will inspect grow sites for compliance of the new Medical Marijuana Ordinance  based on complaints from neighbors or the community, and growers will have the opportunity to appeal if abatement is ordered. 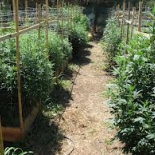 The hearing officer will then  either  uphold what is found in the investigation,  modify what is found or find the investigation not valid.   If found not in compliance , any costs incurred by the sheriff’s office for abatement activity would  be recovered from the grower.   Sheriff Royal says the marijuana growing season extends through October and he anticipates more hearing officers will be appointed on an “as needed” basis.