Loosing an election is disheartening but loosing by just 27 votes is downright painful. The Higgins Fire measure went down to defeat yesterday in an all mail ballot which needed 66.7 percent of the vote for approval.  Less than half of the eligible voters in the Higgins Fire District voted.  6,362 registered voters were mailed a ballot. A  total of 2,867 ballots were cast. Measure O would have added $100 to most property tax bills in the district which covers some 90 square miles in the south county, and allowed the district to hire back 6 firefighter positions that were eliminated in budget cuts last June. Also due to budget cuts Higgins fire has rotated brownouts of two stations in the district and as a result   average response times have doubled  from 6 to 12 minutes.
This is the second time the Higgins Fire District has attempted to increase fees on property owners.  Another ballot measure failed last year. 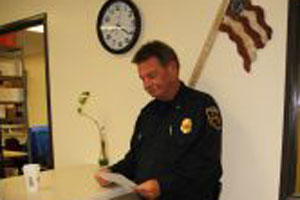 Chief Jerry Good was at the Nevada County Elections Office last  evening to watch the ballots being tallied. He said: “Higgins Fire District and its firefighters will still endeavor to give the best service to the residents of south Nevada County in the present economic and political climate.”

Property owners can now expect to have their insurance policy become more expensive – one of the criteria to calculate premiums being the proximity of a fire station.